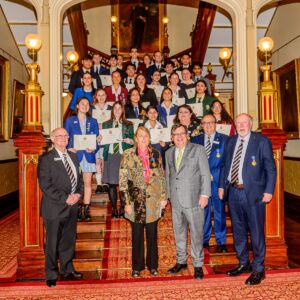 Mary MacKillop Wakeley student Kardina Batti was among only 26 students in NSW to be recognised with a 2022 Youth Community Service Award.

Kardina was presented with a trophy and certificate of commendation by The Honourable Andrew Bell, Chief Justice of the NSW Supreme Court, at Government House on Friday, 2 September.

“Mary MacKillop once said ‘Let us try to keep God with us by charity of thought, word and act’. Kardina who is a caring, compassionate and selfless young woman lives by these words,” Ms Pussich said.

A modest Kardina said: “This award isn’t only mine, it is for all of us because if my loved ones and those in need were not here, who would I have done all of this for?”

Following in Don Bosco’s footsteps
Kardina has supported many groups including Save the Children in Lebanon, Insan Association in Lebanon, Sisters of St Joseph in Australia, Hugh O’Brian Youth Leadership Foundation and Salesians of St Don Bosco. She is also active in her parish.

“I have worked with many schools overseas to help the refugees, such as myself, and kids to gain knowledge and education although the situations we went through were not easy,” Kardina said.

She also volunteers to help on special occasions. For example, for Mother’s Day she helped make beautiful cards. “We wrote kind words and went on a walk to give them to the mothers we met,” she said.

“It all started when I was young. I used to attend Don Bosco and Salesians activities.

“I was inspired by all the teachers and the priest who showed us the real meaning of love and service.”

“I always wanted to be one of those who give their hands to others in order to be better,” Kardina said.

“When volunteering, I meet so many people who have nothing but a precious smile and a heart of gold. These people show me how blessed and grateful I should be, and I see the real meaning of Christianity in them.”

About the Award
Conducted by the Order of Australia Association (NSW) Branch, the Youth Community Service Award is an annual award given to students across NSW who are exemplary community role models.

The nominees were considered by a judging panel of three Medal of the Order of Australia recipients.

“None of the students sought recognition for their actions, but we honour them with the highest recognition available to NSW high school students” – Order of Australia Association NSW Branch Chairman, Jim Mein AM